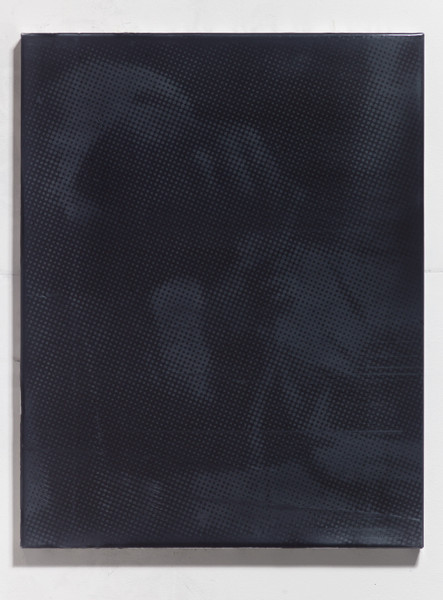 Finger brings together a group of recent paintings on abraded aluminium supports, which feature a number of images of significant yet often reclusive hands (and the occasional tentacle). It continues the artist's long-standing inquiry into the emotional and intellectual intelligence of hands. Its title returns to a group exhibition held in 2012 at Hidde van Seggelen, London, co-curated by Taylor and Richard Bevan and also featuring works by Ed Atkins, Sean Edwards, Sophie Michael, and Mali Morris.

The paintings examine a fundamental aspect of contemporary experience, exploring the relationship between an object at a given time and space and its life as a digitally distributed image.  Transparent blacks formed through interacting glazes of brightly pigmented alkyd resin sometimes conceal and sometimes reveal images in the sanded metal beneath. The mirror-like surfaces draw the reflected viewer and the exhibition environment into thework. The paintings are extremely responsive to changing illumination. In one light they may appear to be deep monochrome panels, alluding to inactive screens—a condition reinforced by their dimensions, which are determined by converting the pixel dimensions of standard video formats into millimetres. In another light, images and incidental marks come into focus, projecting from beneath the paint surface and changing in relation to the movement of the viewer (or, indeed, the sun). Appearing different in each exhibition space and, crucially, in either eye, these works both refuse and require photographic mediation—at normal viewing distances the large halftone dots that form some of the images cannot be resolved into an image with the naked eye but can when condensed through the lens of a smartphone or tablet. As such, the works are never static. Rather, they offer an ongoing process in which there can be no definitive view: toggling between real and virtual, never resolved and always newly unfolding, each object becomes its own stream of images.

This is Taylor’s sixth solo exhibition with the gallery. Beyond exhibiting internationally, he has recently explored the relationship between art and changing technologies of image distribution more theoretically, publishing on, amongst other things, the influence of electrical theory on early nineteenth-century landscape painting and the impact of commercial printing on early twentieth-century sculpture. In 2014 he was a research fellow at Yale University and between 2016 and 2019 a research fellow of the University of Oxford.