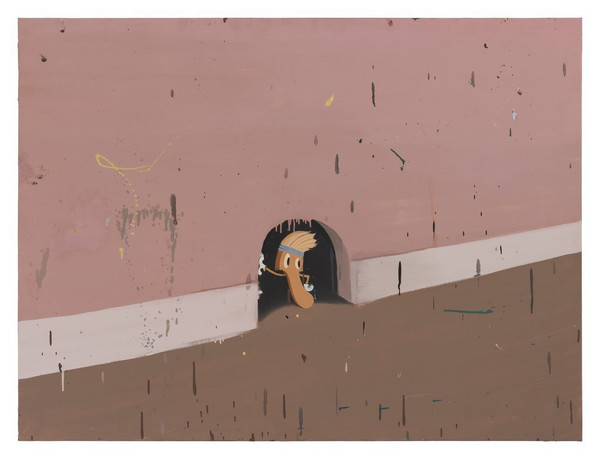 Hidde van Seggelen is proud to announce an exhibition by Spanish artist Pere Llobera.
Pere Llobera’s paintings resemble volatile evocations of possible worlds. The works are like scenes taken from a narrative, fragments in a film or a detective story. Often, they combine various layers and types of visual information. The painterly style is atmospheric, moody; a sleek unevenness suggests that everything can change at any moment; this mercurial aspect is important.
Llobera is interested in the state of the world, he makes art in response to political issues, and takes his inspiration from many artists. He favours a humoristic approach to the unexpected, for example he made a painting of one of his own works, that was hung behind a door because his friend’s wife did not favour it. Sometimes he collaborates with other artists.
This presentation at our gallery features a number of paintings that can perhaps best be described as anomalies, fantastical creations out of the ordinary. In the work A bunch of Gnomes stole Jacko’s Glove, 2020 one sees this intersection of fantasy and reality. Six gnomes steal the glove of Michael Jackson and are they seen marching through a forest with the diamond glove draped over their pointy hats. Jackson’s fantasy world was a nasty one in reality and in literature and cartoons gnomes are just as awkward.
Llobera’s approach gives way to look and think about subjects that are around us; advertisements, pamphlets, cartoons, political figures, books or cars.  The excitement of subject matter is emphasized by two large works in this show: one is titled Superman and the second is called Tió Lisèrgic, a title after a Spanish Christmas tradition Tió de Nadal, where children are being given a wooden log that poops out presents when children hit it with a stick.  Both topics receive the same treatment: superman has not shaved for a couple of days and has clearly done something he very much regrets. The image of the pink log is repeated numerous times within the painting to an almost hallucinating effect, meddling with a Christmas tradition.
What comes forward in these works is a saturnine element, interest in the impasse and a capacity to see it as potential, and a desire to confront all painterly and narrative limitations.
One painting Rococo Guardrail, (2018) shows the side of a road where the crash barrier has been transformed into a golden ‘Rococo’ frame, all curls and shine. The artist tells us that he painted the spot where motorcyclists find their death, making it at least a beautiful place.
For further information please contact galerie on: mail@hiddevanseggelen.com