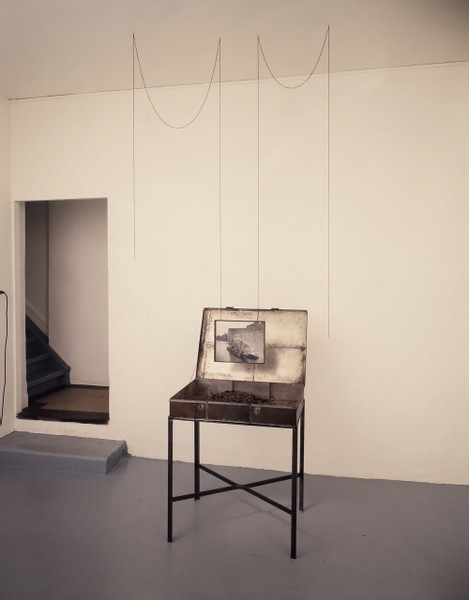 Hidde van Seggelen is proud to present a solo presentation of works by Pieter Laurens Mol at TEFAF New York Spring.
Pieter Laurens Mol rose to international prominence in the mid 1980s with work that combined a Romantic sense of wonder about the world, its phenomena and the position of the artist. During the 1970s he developed a rich body of work that is intimately connected with photo-conceptualism, the movement that spoke up at that time. Mol was recognised for his individual contribution to the field by curators such as the late Jean-Christophe Ammann, specifically for an oeuvre in which photography is the poetic core from where lines are drawn to performance, sculpture, film, drawing and installations. This led to exhibitions in museums and kunsthallen in Switzerland, Germany, France, the Netherlands, the Scandinavian countries and in the USA.
Mol's works investigate many themes. They reflect on a special interest in energy, and use a manifold of forms and materials. The oeuvre as a whole can be compared to a   labyrinthine constellation of signs and symbols, wherein the viewer can easily loose him or herself. Mol's monograph Grand Promptness has a central catalogue chapter called Dutch Reminiscences; it presents works in various media that exhume or excavate historical traces, and propose ways for the memory to keep a cultural legacy alive.The figure of the artist that comes to mind, is that of a pilgrim-wanderer on a voyage to places of lore. Works have an uncanny presence, they appear light and playful, explosive or instructional, and are often doused in melancholy.
The work Six Sad Stones as depicted above is a poignant example of the artist’s position. There is a sense that we should try to connect with our past, and reconfigure it - like in an alchemical quest - ourselves.The works in the presentation at TEFAF date from the late 1970s to the early 1990s, and include three rare installations, photographic works and sculpture.
Solo exhibitions (a selection) by Pieter Laurens Mol include Cultureel Centrum De Beyerd, Breda (NL) (1968), Stedelijk van Abbemuseum, Eindhoven, (NL) (1975), Stedelijk Museum, Amsterdam (NL) (1977), Galerie Helen van der Meij, Amsterdam (NL) (1978), Württembergischer Kunstverein, Stuttgart (DE) (1980), Ikon Gallery, Birmingham (UK) (1981), Kunsthalle Basel, Basel (CH) (1981), Galerie Paul Andriesse, Amsterdam (NL) (1987), Malmö Konsthall, Malmö (SE) (1987), Le Musée de Valence, Valence (FR) (1988), Kunstverein Hamburg, Hamburg (DE) (1988), Louver Gallery, New York (US) (1990), Galleria Sperone, Rome (IT) (1991), Contemporary Arts Center, Cincinnati (US), (1994), Contemporary Arts Museum, Houston (US)(1994), MIT List Visual Arts Center, Boston (US)(1994), Centre Saidye Bronfman, Montreal (CA)(1994). MOMA, New York (US) (1996) and The Douglas Hyde Gallery, Dublin (IE) (1998).
For further information please contact us at: mail@hiddevanseggelen.com
For information about the fair: https://www.tefaf.com/fairs/tefaf-new-york-spring/more-about-tefaf-new-york-spring
Image 1: Pieter Laurens Mol, La Fermantation Subite, 1987
Image 2: Pieter Laurens Mol, Six Sad Stones, 1984-1994
TEFAF NEW YORK
Park Avenue Armory
643 Park Avenue
10065 New York, New York
USA
You can find us at stand #30.
Opening hours
General admission to the fair is from 12 to 8pm on 4 to 7 May, and from 12 to 6pm on 8 May.
Read more