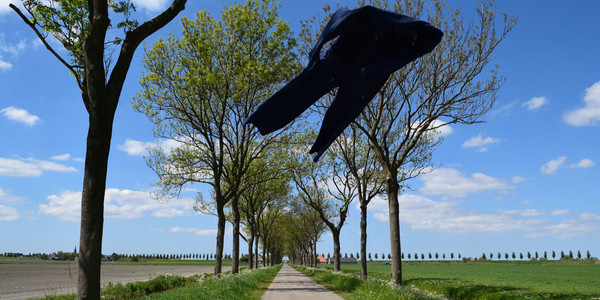 The Kröller-Müller Museum, Otterlo, the Netherlands presents a large solo exhibition of Klaas Kloosterboer, opening Saturday, 9 July 2022. ‘The rules and the game’ brings together more than thirty works ranging from paintings with well-placed blobs of paint to assemblages of boxes and objects trouvés, and from polka-dot works to video works in which Kloosterboer records his actions in the studio.

The exhibition will be on view until 8 January 2023. For further information about The Kröller-Müller Museum click here.
Klaas Kloosterboer (Zuid- en Noord-Schermer, 1959) makes art to create space. His works are the result of actions – the game – that he performs according to the conditions set – the rules – in his studio. The exhibition ‘The rules and the game’ brings together more than thirty of his works: from paintings with well-placed blobs of paint to assemblages of boxes and other objects trouvés, and from polka-dot paintings to video works in which Kloosterboer records his actions in the studio.

Kloosterboer’s works are the result of decisive actions that are preceded by a long process of creating conditions: formulating rules, setting up the studio, arranging materials. The lengthy thought process is just as important as the decision to create a work with a single deliberate act. And what it all comes down to: every action must be concise and correct, because every choice means excluding other possibilities. By consistently acting resolutely, Kloosterboer has developed a multifaceted oeuvre of lucid works of art.

As a painter, Kloosterboer is aware that he is part of a centuries-old tradition and that with every new work he once again relates to the work of his predecessors. In his curiosity to see things from a different perspective, he constantly seeks new ways to approach painting: from the appropriation of existing objects (boxes) or patterns (polka-dots) to the declaration of rules or the photographic documentation of an action. Without being too certain – because ‘certainty limits the scope for thinking and acting’ – he goes to work like a juggler, deciding in a split second how to catch the ball and throw it back into the air. And he knows: when the juggler is indecisive he will fail, drop the ball and the game will be over.
Read more